I Am Woman Watch Me Roar – Bek Davis

So far we have featured a cross section of musical paths and styles with Zoe Ryan, Jenni Dagley, Lacunae Glow, Seraya, Elaine Nolan and Melody Moon. Still to come is interview responses from Symmetrix, Anya Trybala, Luana Moreno, Jasmine Lynch, Ivy Lucille and possibly more. Each week I feature women musicians from my network talking on theme from an honest, uncensored place about their personal perspectives on issues for women in music. We are just beginning. My next personal blog might be controversial, it will heavily critique pop culture and the portrayal of women and the abuse of sexuality for profit, but that is next week and still to be written. 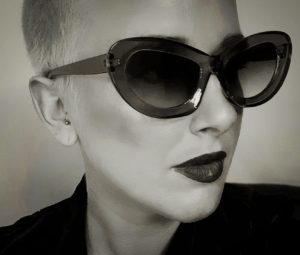 Briefly describe your role in Music? (eg songwriter producer dj, radio, manager,
engineer, all rounder etc)
I am a vocalist, songwriter and producer.
How long have you been engaged in your musical journey?
Music has always played a huge and very important role in my life. One of my very first memories was singing and playing on my grandparents old piano and the endless dancing around the lounge room to all different genres of music. I was very lucky, to grow up in a family who appreciate music and always had it playing. My grandma was an opera singer in London, and my mother was a ballerina in the Australian Ballet School, and my older brother had a pretty cool collection of CD’s… Music has always just been a part of how I can function “normally” and will always
be.
I wrote my first song when I was 8 years old and recorded it on a cassette player. I’ve been writing and recording songs ever since! I’ve been creating, performing, and playing music since I was a child. I’ve studied music at TAFE,Uni and dedicated as much as my life as I can to pursuing it. I’ve played in bands in Brisbane and in Melbourne. I’ve played solo,I’ve played in
duos.I moved to Melbourne 10 years ago to follow my music dream. I’ve had a few set backs a big break away from it, but I always find myself coming back to it. Music is a part of me and always will be.

In what ways has unconscious bias (sexism or other) affected you personally?
When I first moved to Melbourne, I was young and fairly naive. My whole focus was to pursue music and I didn’t want to turn down any opportunity. I learnt pretty quickly, that there are a lot of older men in the industry who take advantage of younger women and say that they can “help you” and “make you famous” with all of their “connections”… majority of those times were met with ulterior motives, setbacks and disappointments. However, I have also met plenty of really wonderful men who have encouraged, supported and assisted in shaping my musical journey. You’ve just got to be very choosy with who you let into your support network. With anything, you’ve got to back yourself and trust yourself. With experience, you learn these things!

I’ m sharing this video to showcase snippets of songs that will be on my E.P that will be released next year. In lock down, I’ve had time to try and teach myself guitar and hopefully by next year I will have the skills to play not only synth/keys live, but also guitar!

What do you feel women need the most to thrive in the current social and musical climate?
Confidence. A lack of confidence remains one of the most pervasive forms of unconscious bias
within the music industry. Women have to be so good at something before they put themselves out there. A lot of men jump right in, which is great… but we should encourage women to jump in the deep end too. Be brave, be loud, be you! Don’t be afraid to be different! Create support each other and connect.

What has been the greatest obstacle you have had to overcome on your musical path?
Going on one of those rubbish televised music shows. Scripted, humiliating soul degrading nonsense. It definitely took a toll on my mental health and took away my love for music and performing for a very long time.
I Do NOT recommend it.

What is unique about a women’s voice, and approach that is so desperately needed in
music today?
The fragility, vulnerability and honesty.
Do you have any advise for young women or others in the early stages of their musical exploration/ journey?
Keep going. Be unapologetic and resilient.
There will be painful setbacks, there will be self-doubt, there will be people you meet who don’t have your best intentions at heart, and life will sometimes get in the way…but KEEP GOING.
Trust yourself, back yourself, push yourself, and connect with as many like-minded people as you can. Be choosy who you let in your circle and have the self-confidence to push on and on and on.

What’s in the Future for Bek Davis music? I am planning to record and release an EP under my own name and I’ve recently formed a band with a couple of friends… the name will be announced once lock down is over and we start gigging.

Thanks so much Bek I look forward to your release and band playing live, all the best on your musical journey. read the other interviewees in the descending scroll below.