Catherine creates compelling characters. Embodiment’s of the divine feminine, from the mysterious wellspring of feminine spirituality and creativity. Epic, archetypal, ritualistic; each being commands the attention of the audience and delivers on par the presence of grace, wisdom, universal love  and deep knowing, in themed works  aligned with causes  the artist cares passionately about. These characters emerged over time as the result of her 2nd university major Performance Art. They are embodied for live performance, photo shoots, film, narration work and musical recordings. I found Performance Art quite revolutionary, a place where all art forms could be combined into one. A blending of theater, shamanism, and performative traditions, catharsis and a supreme space for the alchemy of transmutation/ transformation. With them she gives voice to multitudes who never were heard….as voices on the wind, faces in the grand gallery of time.

FROM THE NORTH- THE CALL OF OMA 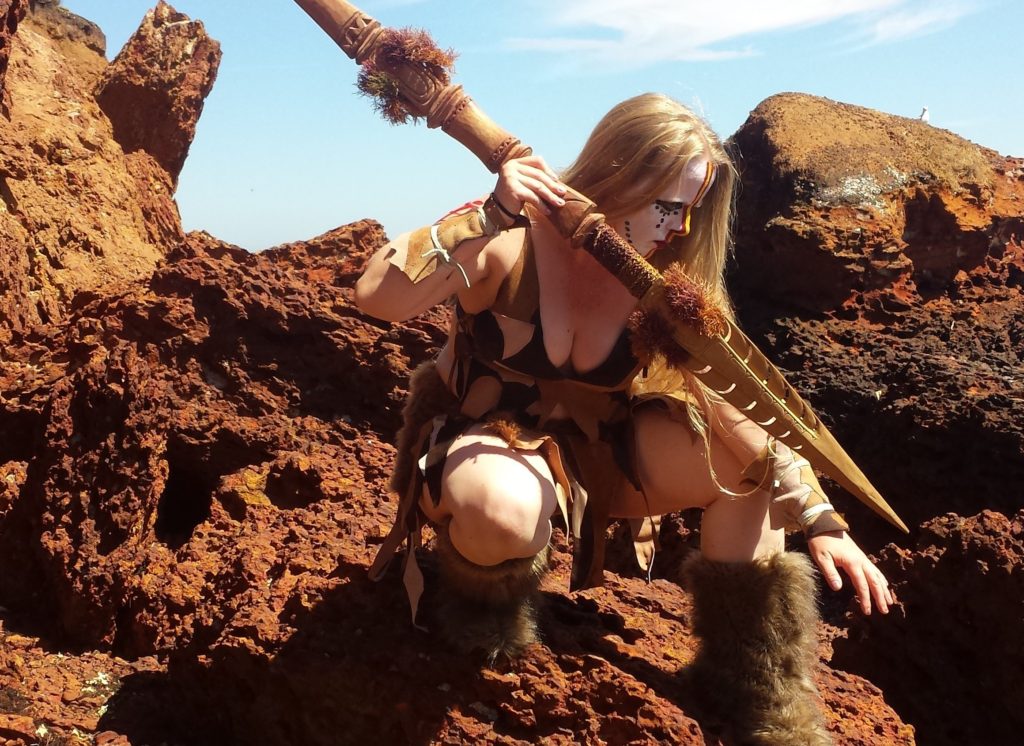 Oma is an Ancient Clan Mother from the North, a root race Guardian of the Earth. She comes from a distant time and age, the last great Ice Age. Oma was first presented to the public as a tribal looking woman  in the  ‘I Am (Song of the Earth)’ film clip. Oma launched the song at a special performance event called ‘The Call of Oma’ on Earth day 2017. This live performance featured 4 songs, and readings from the Book of Oma. Audience response led Catherine to realize that the story must live beyond this one featured event, subsequently  inspiring the creation and production of the ten track electro orchestral concept album during 2017-2018. ‘Come Back’ film clip was released on World Oceans Day 2019. The album ‘The Call of Oma’ was released on World Mountains day, 11th December 2019  and is available at all digital outlets and on Bandcamp. Powerful environmental and spiritual methods are woven within the albums narration and songs. View the playlist of album release videos featuring Oma and the related research in earth science as well as mythology linked  to the albums production below. In loving memory of Maria Triantos photographer cinematographer I Am (Song of the Earth) R.I.P 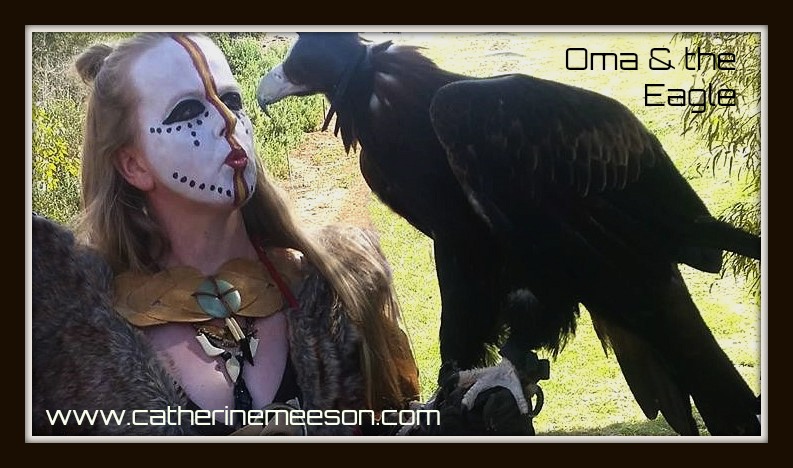 ‘ The Firey Serpents’ from the original 2017 performance of ‘The Call of Oma’.

‘The Call of Oma’ concept album is out now through all major digital outlets or via Bandcamp.

‘BY THE MANDATE OF HEAVEN’

Inspired by Quan Yin ‘She who hears the cries of the Earth’.

The work was created and produced in support of the Australian Earth Laws Alliance to raise funds for the first Rights of Nature conference. The artist received no payment. All efforts have been made to save and share all necessary attributions, if per chance there is anything un-attributed please contact the artists to discuss that matter.

Please visit the attributions page of the artists website below

‘By the Mandate of Heaven’ is a film release of the live performance art play from 2016 which breaks the fourth wall in an interactive two-character 1 actor show. It was performed at ‘We Are One Stories of the Earth Community’ at the Chalice Northcote in support of Australia’s first Rights of Nature conference by the Australian Earth Laws Alliance, Earth Arts.

It was performed as a devised play in 3 Acts by Catherine Meeson.

It is a spiritual, philosophical, environmental, social commentary that looks at and critiques our current civilizations modus operandi- through interactive audience address and audio visual performance method.

It is a timely message, a plea for and on behalf of all souls including the earth herself. Infused with the echo and essence of timeless wisdom’s and the vision of life today, The Mandate of Heaven calls on the will of the people to act. It reflects on the ethics of human dominance, governance and ownership, the economic imperative, worth and the foundations for life. It speaks for the community of life from the perspective of the inter-cessionary principle. It challenges current models in light of universal inter-species ethics and directly prompts persons to contemplation and action. It proposes future karma and the need to reassess the founding structures upon which our civilization stands.  It calls to account. It asks the participant to contemplate many things. It is an intercession, a point of departure to a future as yet unwritten.

Act 1. Bodhisattva and the A-bom-i-nation

Act 2. A System of Measure

A one women multi media show with multiple characters The Bodhisattva & The Minister from the Imperial Court of Weights and Measures.

All works of ‘Archetypal Alchemy’ are ‘Sonic Sanctuary Productions’ by  Catherine Meeson © 2016.

Performed on August 27th 2016 as part of RONA16 ‘We Are One- Stories Of The Earth Community’ at Uniting Church Chalice, a special event to raise funds to support the first Australian Earth Laws Alliance conference in Brisbane Australia. 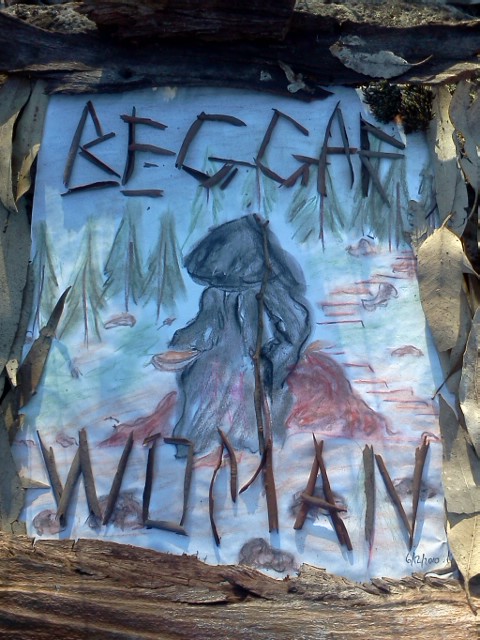 Beggar Woman was born in 2010  at Daylesford’s Mt Franklin. The Beggar Woman is  an archetypal old wise woman; beggar, prophetess, full of  provocative musings on the world, akin to England’s Mother Shipton of 16th century fame. The Beggar Woman engages in site specific performance art, with some scripted elements, and props but likes to  make use of the time/ space of her local to inspire her communications, doing largely improvised works.

She likes to interact with audiences and was first seen publicly  at The Body Voice Center during the ‘Company of Others gatherings‘ with Margaret Cameron (RIP). She can been seen in her earliest aspect on Youtube below in  ‘The Beggar Woman act 1′ a totally improvised performance.

Sometimes a sublime vessel is born, a vessel  for alchemical work. Such is the Beggar Woman. She walked down the mountainside of Mt Franklin, out of the  flames of the fire as the great work was done. (The transmutation of nearly two decades of pain and suffering as I  went through medical treatment for a long term condition which significantly impacted the quality of life of my youth).

She appeared at the Goddess Within event to raise funds for rehabilitation of sex trafficked woman and children in a special improvisation upon a theme, ‘Beggar Woman Wails for the World of Woman’ an event produced by Anjali Sengupta of Embracing Spirit (all funds to the the Art2Healing project).

Beggar Woman also appears in an improvised short film, with minimalist music and select commentary and narration, see Beggar Woman Walks By the Waters movie below. This is available to purchase from the artist.

The dvd cover is as she first appeared, it is her birth certificate one could say. Her language is metaphor, her native tongue. She is somewhat timeless as she speaks of the human condition and the global environmental condition, tinged with a hint of the prophetic.

The movie was publicly screened in an intimate gathering and Beggar Woman appeared again in an improvised performance sharing, the juxtaposition of the screen and the living presence proving confronting; yet necessary as  the flesh does not abstract.

Once upon a time
There were many creatures who dwelt here
And then on marched time…with it the minds of men
Forgetting that they too
Are creatures of the earth
This they create instead
And they believe it is just
Yet in honouring housing only themselves
And that which they choose
They decimate the many, the many creatures who
Once dwelt here
Old world new world
And so the old world begins to pass away
And the great change where many things will become myth
Pass into memory
They study with their instruments of science
Seeking to discover the mysteries of creation
Whilst before their eyes
It passes
An ephemeral trace
Like the wind
Yet the wind carries voices
It carries the voices
Of everything that ever was
In the great substance
That is itself ….ethereal, the great field of being.
I ask now,
Now that you notice, notice what is happening
Care enough to change
Or the change will be decided for you
That hand of mercy … you may not meet
So before you say all is woe
It is the end
Know in time tis but a trace
A dream of being
The human race

The great race that wiped out all life.

GRACE AND THE GRAIL

Grace and the Grail performance by Catherine Meeson at Acts of Love: Sacred Connections in support of St Kilda Gatehouse on 12th April 2015. Music: ‘Her Story’ from the  Atmospherica album available to purchase on Bandcamp only.

Embracing Spirit presented Acts of Love: Sacred Connections, an annual, multi-cultural, collaborative, community arts event featuring a diverse range of talented local artists, visual artists and performers. In 2015 the event supported St Kilda Gatehouse – a not for profit organisation which works alongside those involved in street sex work who are often marginalised and have life controlling addictions. St Kilda Gatehouse provides a place where the sex workers in Melbourne can find the support and care needed as they attempt to build a life off the streets and beyond drug addiction. 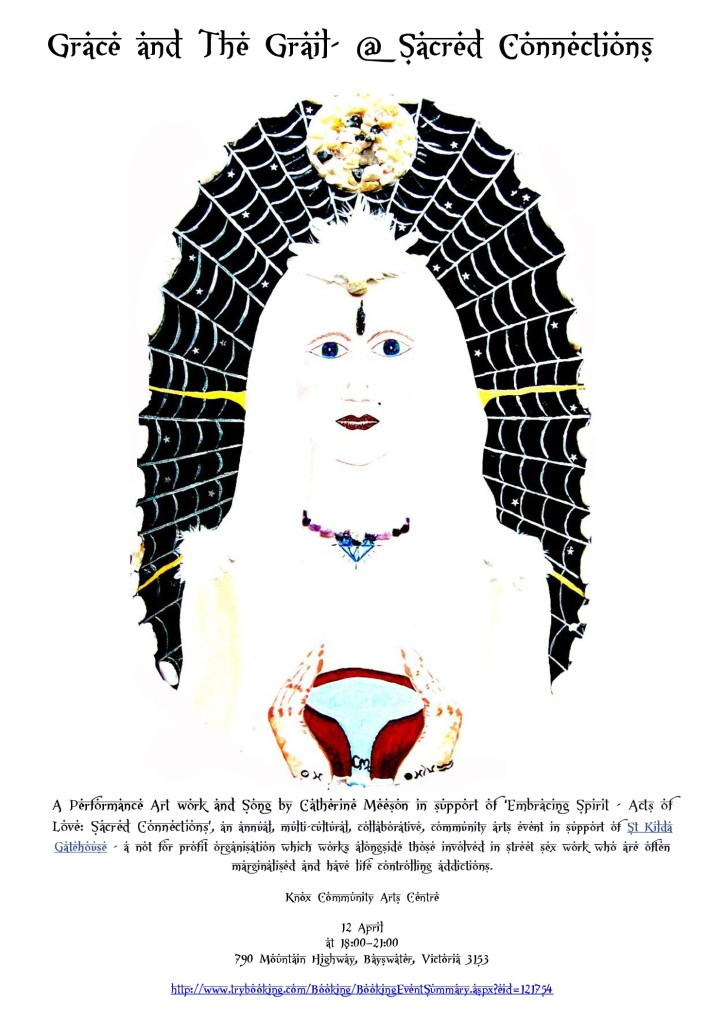 ‘Grace’ was the characterisation of the divine feminine I doned to contribute to Acts of Love, she was an embodiment and homage to the divine feminine who conducted the sacred rite of blessings for the space, audience, women and world. Grace is Grail barer,  and the grail is an ancient archetypal symbol for the divine feminine; as well as  the cup that caught the  blood of Christ Yeshua as he was crucified (so we are told). The image for the above came from a painting I did circa 1998, of Grace being a crier in the Valley of tears, the grail catching the tears of the collective souls of time. She sits amidst the imagery of the spider women mythos the great creatrix of Native American mythology and has the moon as her halo, again another symbol for the feminine,  for the intuition, the tides  and the yin of the planetary forces. The grail barer, the cup barer is filled and then must empty, such is the nature of the experience of time. She holds the space for all the lineages of the divine feminine from all cultures, and as Quan Yin once told me, “You can only have one cup from the fountain on the mountain”.

GRACE IS A CRIER

Grace is a crier in the Valley of tears,
Grace holds the grail of perpetual motion,
In the realm of universal being.
She refills the oceans with the salt of life.
and reflects the sorrows of being.
As a maker of drops, a source of ripples,
she carries on alone,
for it is her duty,
to feel the universal heartbeat,
and cry the tears that others will not.
She is a shard of the mother being,
witness to time,
voice on the winds,
spirit over the waters,
Grace keeper of the grail. 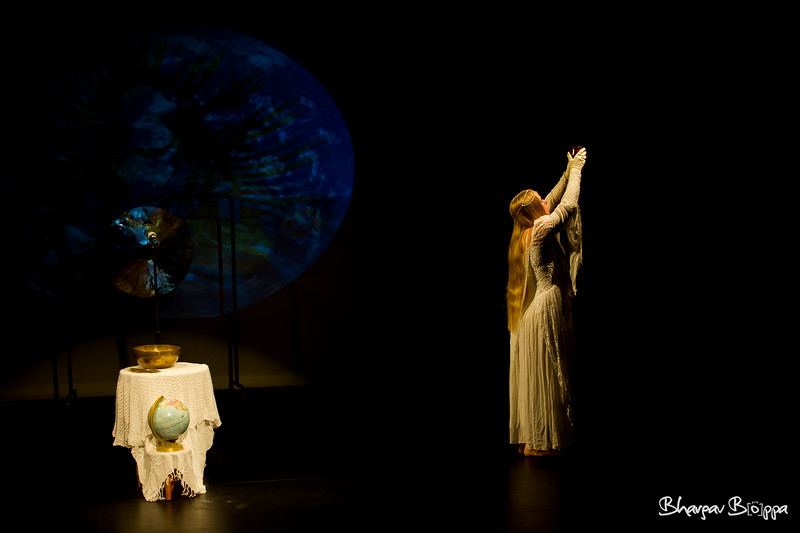 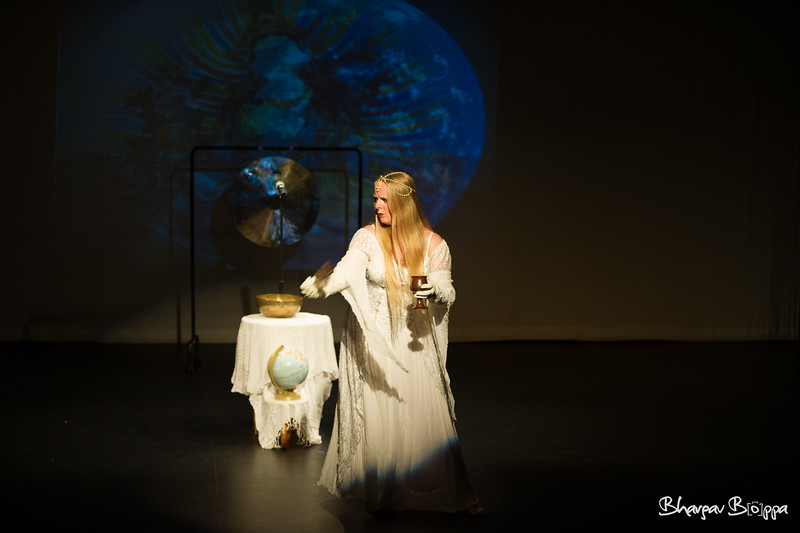 Avatara is the first character to emerge before Uni who initially was a personal art therapy creation, which when worked with spoke to me deeply about my personally struggles with depression and unfulfillment and being a fringe dweller/ social misfit. She is a blue  masked figure who is more inclined  to mime and  personal engagement, and features on the cover of Revolution Complete my first album walking out of a Stellar constellation. Her only public performance was as a roving dancer in the crowds of Maitreya festival at night time, mezmerizing the audience with feathers in 2011.