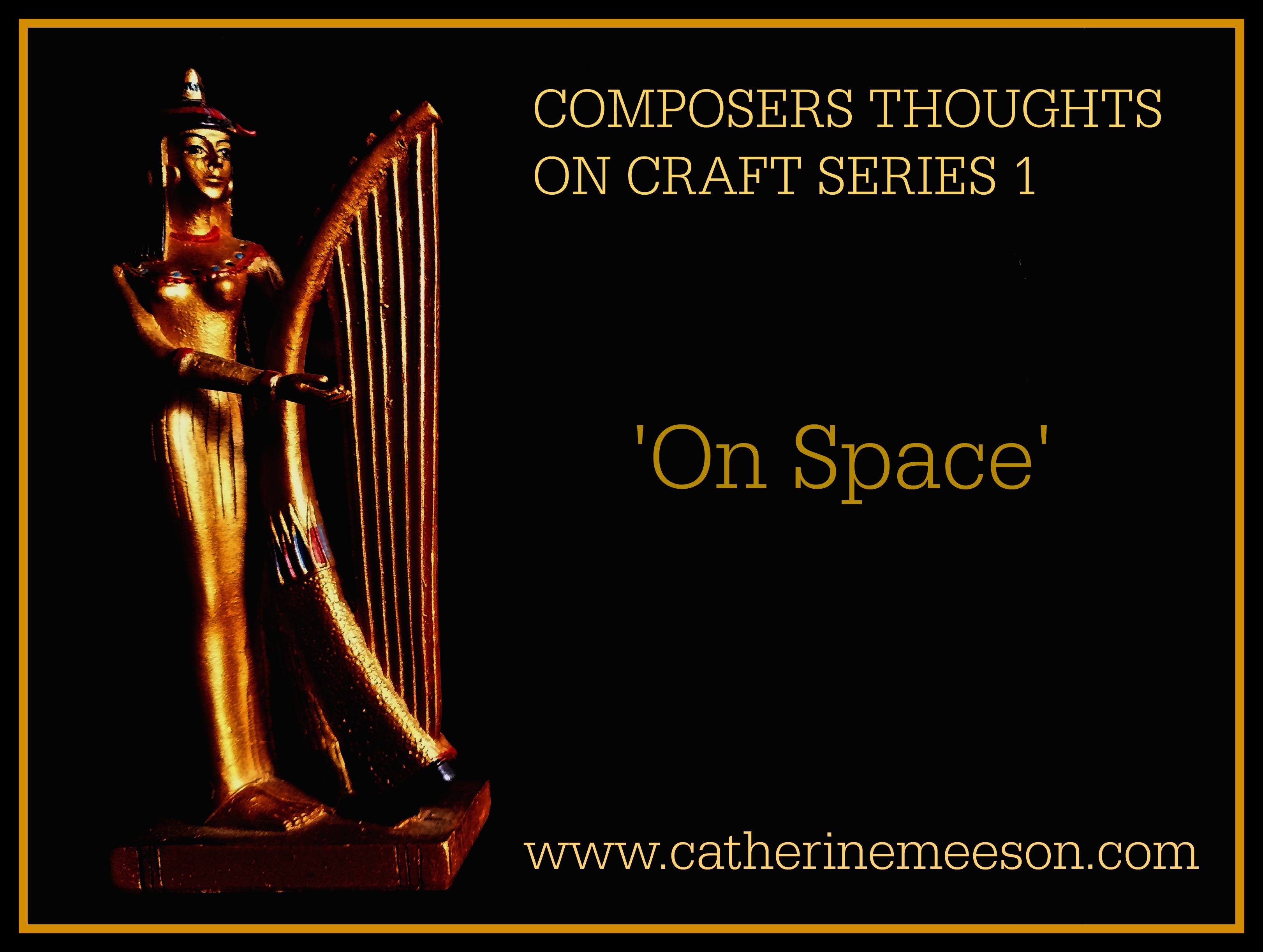 Space as the final frontier – the Star Trek by-line that may have inferred travelling into the outer regions of 3rd dimensional space via wormholes and hyperspace to distant universes, but it is just as much a simultaneous involutionary journey into the micro spheres and the world’s within. The worlds where infinite space and potential also dwell. The ability to perceive this space can be cultivated as a spiritual practice and the ability to emulate space is part of a musician’s toolkit.

For me space and music go hand-in-hand. I fondly remember listening to ‘War the World’s’ and Jean Michel Jarres ‘Oxygene’, in the attic as a kid, with thunderstorms and torrential rain all around in England. This left such a deep impression upon my psyche, creating a perceptual scaffolding that I would later return to. I have stated before how my early childhood listening triggered places within my mind that I could travel to via sound. I could perceive aspects of place within sound and received visual images. It was like astral travelling.

When doing my honours I discovered studies had been done which confirmed our ability to spatial map and represent place from only a recorded piece of audio. Spatial mapping within the human perceptual system relates to our ability to discern the dimensionality of space. That is how much information about space and place is conveyed in sound, that people are able to sketch  their impressions  from a sample and it matches the recording.

For a composer (as for a visual artist or an architect), if we work well, we can program perception or alter the ‘doorways to perception’ (Aldous Huxley) by offering distinct concepts in our music, in the creation of the architecture of space. We do this on many levels simultaneously, with instrumentation choices, with the arrangement, with the emulation and modelling of physical space through processing and sound engineering that can model physical acoustics in the real world (I am still learning- I studied performance/ composition not engineering).

Not everyone will be capable of perceiving our intentions, but many will, this has been my experience with me sharing my music and people sharing with me the imagery and the feeling sense that it has generated. What I received whilst composing has been transmitted via the music as ‘a carrier wave  of consciousness’ principle (Joshua Leeds or Steven Halpern? One of them said it). Comments have included

“Like being in an omnisphere travelling round the universe”

“Takes me back to a time when enlightenment was everything”

“ Being in space , journeys of immersion and transportation, music you can lose yourself in”

“ Immersive and spacey” “ “Mysterious ambiance- portal to another world”

“relaxing beautiful easy to listen to”

“Totally EPIC!! I love the drama and build in this. The imagery takes me to a distant land in Medieval times, standing on a cliff overlooking the sea…taking in all the feelings it’s beauty and raw power evoke…being at one with nature. The orchestral backing is complex and soothing, and the lyrics come alive with your vocal delivery. This would be perfect in a cinematic soundscape. Much success with this!!” Rick Mc Clure Eclectica n Fusion USA https://www.facebook.com/RickTheRockRadio1670am/

“It’s so theatrical. Full of emotion and drama. You enunciate in a way that it’s powerful to hear the words, the intention clear and concise. I can imagine while listening arm movements pulling at the tides and trees, twining around to lift up their branches higher”. Tracey Perry Expansion of Presence USA https://www.facebook.com/TracysEOP/

“Catherine Meeson is back with a incredible defying & empowering set of music. She has grown and sounds superbly strong in all her elements of her natural self. She is not only channeling a true warrior called ‘Oma’ protecting the earth and its natural surroundings, she is in fact the earth itself in person; ready to fight anyone stupid enough to disrespect her awesome grounds and protégées. She is the ground, the air and the animals & with her very majestic sounding theme song ‘I Am (song of the earth)’ you know she has all under control, as she is richly armed with a full set of self love for Mother Nature’s own world of wonders”. Read more https://yeahiknowitsucks.wordpress.com/2017/05/05/catherine-meeson-i-am-song-of-the-earth/

So what is space and what relationship does it have to music?

The original masters of electronic  Tangerine Dream – glad I got to film the last ever concert and to shake the hand of Edgar Frose.

What is space in physics and metaphysics?

Space exists as a conceptual framework. It is both an aspect of aesthetics, and an aspect of acoustics and production. It can be emulated with representational spatial dynamics. It is also the realm of consciousness and perception. Let’s go one step at a time.

Space definition- as a noun we have multiple uses and contexts, generally “A continuous area or expanse which is free, available, or unoccupied; The dimensions of height, depth, and width within which all things exist and move” (Oxford University Press n.d.). We have examples relating to the physics of space.

We have examples related to the nature of psychic or inner space. We have physical time and structural aspects. We have reference to music, but not to knowledge specific fields like compositional use or psychoacoustics in dictionaries.

When we talk about space we talk about it on multiple levels, as a metaphor, as a thing, as a feeling. It is a multidimensional construct that contains the nature of everything ultimately and nothing simultaneously, a very Zen notion. It is also the realm of mind which is infinite and knows no  limit, the only limits are in the nature of the perceiver or receiver.

It could be said that space is like the fabric of the universal mind stretching out into infinity creating new worlds, something we will never know the alpha or omega of, in truth. And yet we will always be seekers, voyagers of the inner and outer realms of space.

My honours degree had a big focus on emulating space and representational spatial dynamics, creating a sense of place via music and soundscape samples, attempting to model and alter aspects of real world perception.

Back to the music. In music, space has a varied function. Music needs to have space to breath, if it is too full, too dense, we feel a sense of psychological tension with no room to move. Much like in the physical realm it has the ability in music to generate and direct feeling and thought on many levels. What contributes to space in music?

The electronic era has brought many fantastic innovations with audio engineering enabling us to be spatial artists of the minutest aspects of sound and therefore space. We can go into the essence of a sample and totally transform it. My favourite synthesizers are pad type sounds or strings those that tend to have broad spatial width and spread out, with long sustains. Frequency content is important in creating space to facilitate embodiment or  a sense of ascent and flight of the spirit. Synth pads are like a base colour or palette to work on. Drones are lovely for creating a sense of space as a tonal aspect, that give us a fundamental to build tension and release upon and scaffold other instruments. The sound envelope is very telling with different instrument or sound sample timbres. The essence of a sound and its ability to create a sense of place, mood or vibe (i.e ‘space’) is contained within it and links back to  the physical attributes involved in its production, (size of instrument, materials,  dimensions etc).

Floyd were wonderful innovators long before  The Wall and Dark Side of the Moon- setting the precedent for spaciousness in music.

There are many musical stereotypes with tonality and instrumentation that can be employed to create the psychological space one wants to achieve. It is worth considering these, but as with all things, hold it in the mind and then let it sail on down the river and let the muse take hold or the creative process itself. It is my firm belief that we follow the work, it leads, it forms itself through us, through our hands, minds and hearts. One can be intentional and know all sorts of things, but without inspiration, without the mystery that creates beauty out of nothing, the essential grace of a work would not come to be.

So you see there are multiple levels upon which we can create space. I am not going too deep or too long with this ‘Composers Thoughts on Craft Series’, as we still have many topics to discuss and we are now completing the album with the beginning of track 10 Foundation and Summons.

Next up we will have On History, then On Inspiration, On Improvisation, On Intention and more. I may start combining them. On Conceptualisation, On Studio-craft, On Social Norms and lastly On Philosophy, a topic I contemplate doing as a masters or phd  (musical) and even if that does not happen I do intend on writing a book on the topic.

My exclusive subscribers, I invite you to click on the exclusive video link and come into the Sonic Sanctuary cave (my studio) where I take you into the heart of the albums musical mythology and why it is important to me. I hope it will also be important to you, I know many thousands of souls share my deepest environmental concerns and relational sentiments.  I invite you to get an exclusive sneak peak into the beginning of track 10 written this morning. I also invite you to receive my gift for travelling on board the Magical Mythical Windcatcher with me through the fields of time and space (My musical boat) my third album Contemplating Buddha.

If you want the exclusive access you need to sign up for my emails, (I will never spam you).

To receive the free gift from my back catalogue with full cd art only available directly from me or Bandcamp you need to be singned up and  double opt in.