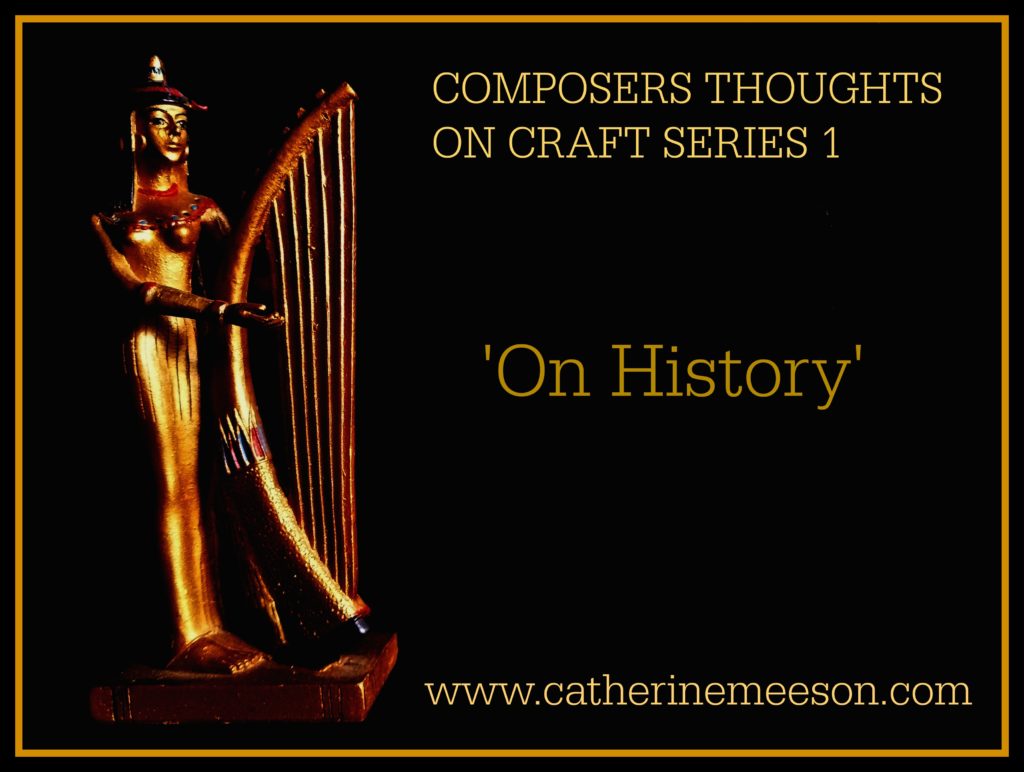 Welcome to the 8th in the series of the Composers Thoughts on Craft Series- On History that have been written to accompany the composition of The Call of Oma album, which is now in its final stages, hopefully to be finished this week. This blog will reflect on the concept of history in a general sense and the role of the Musical Mythologist or storyteller.

I am sitting here listening again and again to the layers I am building for the final track Foundation and Summons for The Call of Oma album (at bar 81) which is part of the necessary process of composition/ arrangement. This is the track where we are summoned from the Dream of being, from the very spirit of the earth herself, that living repository of history whom is the receptacle for all the lesser affairs of humanity. Humanity is but a wind passing through time, whose bones will become no more than the dust from which they came from or so we are told. Veiled allegory and metaphor aside, the driving force in history is always the expression of power relations, and the powers that have been for millennia on this earthen plane, are leading us all to damnation (i.e. the sixth great extinction). We know now the thanks to scientific truths that we do in fact become; of the dust of the mineral strata of the earth, which than forms the vegetable and the animal kingdoms. Such truths are more than pure poetry. How such truths are read as well as having the right minds to read or interpret is important; requiring those whom have the spirit of illumination indwelling for all the right (not wrong reasons), matters.

There is also a spiritual revolution going on across the face of this earth, a great awakening which will continue to spark many souls. Each wave of awakening more and more powerful. Why am I going on about this? because it is a big topic and I do not want to see by virtue of man’s sheer stupidity, the creatures and life forms of this earth perish because of our wanton desire nature. We have governments, leaders and corporation interests whom are denying and even suppressing the scientific facts all around us and biotech corporations even talk of having found the god gene and manipulating it so that higher level spiritual perceptions can be controlled and bypassed. Ask yourself do you want to become an automaton? Are you happy as a slave or would you liberate yourself and life in turn, with the truth found in universal wisdoms and relation? Relation is, period. I have been told all my life not to preach, but I must share what is given to me or my life is not worth living. This albums concept is given me.

It is a big album, a big concept, a big message. I did not know if I could do it, but it is nearly complete in compositional form. I have done it. This idea of prehistory, of forgotten stories and times hinted at in world mythologies, began as a song from a play from a performance art project a few years ago called By the Mandate of Heaven which was created in support of Australia’s first Rights of Nature conference. It contained two other characters and I wrote the song I Am (Song of The Earth), [album track 8] for it. That work was than developed further and launched on Earth day 2017 with a bunch of other songs being written and prose poetry quasi philosophical musings. That is what spawned this album. Funny how the chalice bears waters that are eternally renewing.

For more information on The Rights of Nature go here

According to the brilliant writer researcher Graham Hancock, we now have evidence in various branches of science such as palaeo-climatological ice cores and in the  boundary layers of mineral strata of the earth, in  nano diamonds, and  in the unearthed ancient ruins such as Gobekli Tepi in Turkey. The proof is all around us, but we have become so attached to our versions of recorded histories that our forgotten histories, that those veiled in myth we regard as quaint stories. Yet how else but story is memory preserved over vast spans of time. The human lifespan is short. Story has always been the way to preserve histories. Graham is a huge inspiration for this album and his research delves into the science and the mythology. How many are even told such myths and stories anymore in this age to which we are subsumed, made to become digital data, bits and bites traveling at light speed across cables in techno ether space only to be recapitulated at the other end. Some feel there is even a deliberate suppression of such truths because the control agenda has of course, great vested economic interests. People will always be involved in great wars for territories and earths prima materia (resources). The thing about truth and history is, it can not be denied forever, even if those who are the conquerors re write it. The information exists in the ‘field of life’ the psychic information fields or akasha and those what learn to read it, can read and decipher. Such insights are not privileged to only one branch of human knowledge. So deep time has a way of coming around again. Truth, has  its own resonance. All will be known in the great age of Revelation, for that is what revelation means a re- revealing of that which is known.

Back to the Issue of Craft

I did not know setting out with the composers thoughts series, when I would finish the album or the series. The penned blog titles I am only half way through, this being the 8th of  15. At this point I will keep it brief. I will say look to the great myths of time for what they can teach. No civilisation is meant to last forever, they are not fixed. We fool ourselves with illusions of immortality and yet we leave remains behind which confer it in a way. Only the spirit is immortal, we are but journeyers here. The whole point of the human journey through time, through history is to become conscious and realised, then we have that god given power to be agents of great change. So this is the message in a way of Foundation and Summons, and The Call of Oma album, to awaken people, to remember and it features a call to rise, to be, to answer the call and become a Root Race Guardian of the Earth to stand for all life and defend the future whatever the cost. The decisions we all make now have massive karmic implications for future generations of all life on earth, and it is our duty to defend those whom cannot defend themselves.

So the role of a Musical Mythologist is akin to a Bard (one of the offices of the Druid orders) a lover of the earth who transmits tales through arts and culture, or a kind of minstrel or troubadour of old, though singing about different themes, one who shares and transmits tales of culture and custom for the people.  Many musicians and composers create concept works and albums and have always made myth and legend the stuff of their works. That is part of the role of the arts. Musicians make beautiful and potent, that which can be overwhelming, that of the human condition of emotional and character extremes. The lesson for us is to receive universal wisdom. The vessel is the messenger and Ancient Clan Mother of the North Oma. It is The Call of Oma.

Till next in the series, no.9,  ‘On Inspiration’ & no. 10 ‘ On Improvisation’ which will also feature a behind the scenes video for my exclusive email subscribers, thank you for stopping by, please share your thoughts with me and share this post. I do hope you will support my crowdfund when that is launched to produce the album. Much love and blessings Catherine Meeson