First single to sail from my ship

It’s coming soon- the first single to sail from my ship the glorious Windcatcher, a ship with 11 sails this round.

You know for some people who write/ make music, the way they record is a short hand- forget the notes on the stave I didn’t learn that till Tafe and even so, I cannot look at it and play it sight reading, first off. When I did learn about it, it  was through analysis and programming into Sibelius. It’s hieroglyphic chord charts for me and numbers, pictures of guitar necks, kind of melodic contours, picture pictures, a bit of a mess? Probably never legible to another unless one actually records it, then the sonic is the guide.

In high school in year 7 I thought ‘read music who want to do that?’, our teacher showed us a few chords, we had a band called The Stormers, the rest we figured out as we went. We played, we followed the ear, looked at books, worked it out, improvised. That’s what teenagers do anyway, rebel, and find their own way. Well, learning theoretical foundations could have gone along way, it really excludes a lot of stuff and my ability to communicate. I wish I did know how to score properly, but audio recording has saved me I can give form to musical longings  without a stave or a band. Even if someone said play this chord, like they did the other day, likely unless it’s a basic one on piano I’d have to consult my books, and work it out, play around. I forgot some pathways have not linked up. I’ll look at the picture and go yep that, or I’ll just listen and work it out best I can. I’ll have to hear the bass note and build the chord around that. It makes me feel totally crap sometimes, like I can’t play. But then what is the essence of playing its a scale thing from experimenting and learning to maestro and virtuoso. But give me some tools  and leave me alone and I’ll show you what I can do- then I just play it and practice it till I  get it sounding right, get it into the main frame and the body. Who cares if it is just studio work or if it goes live?

Reading this, maybe you’ll think ‘that gal is crazy, but I just ask you to listen to what I can do and have produced not judge my failings. I figure maybe I could get a bit of credit for what I can do,  I can write and arrange stuff, sound stuff. Stuff that sounds sort of ok to me. Before sheet was ear, was watching and playing around, all music is experimental, knowledge gets codified into convention that we break the rules  and conventions and explore the boundaries in new ways. 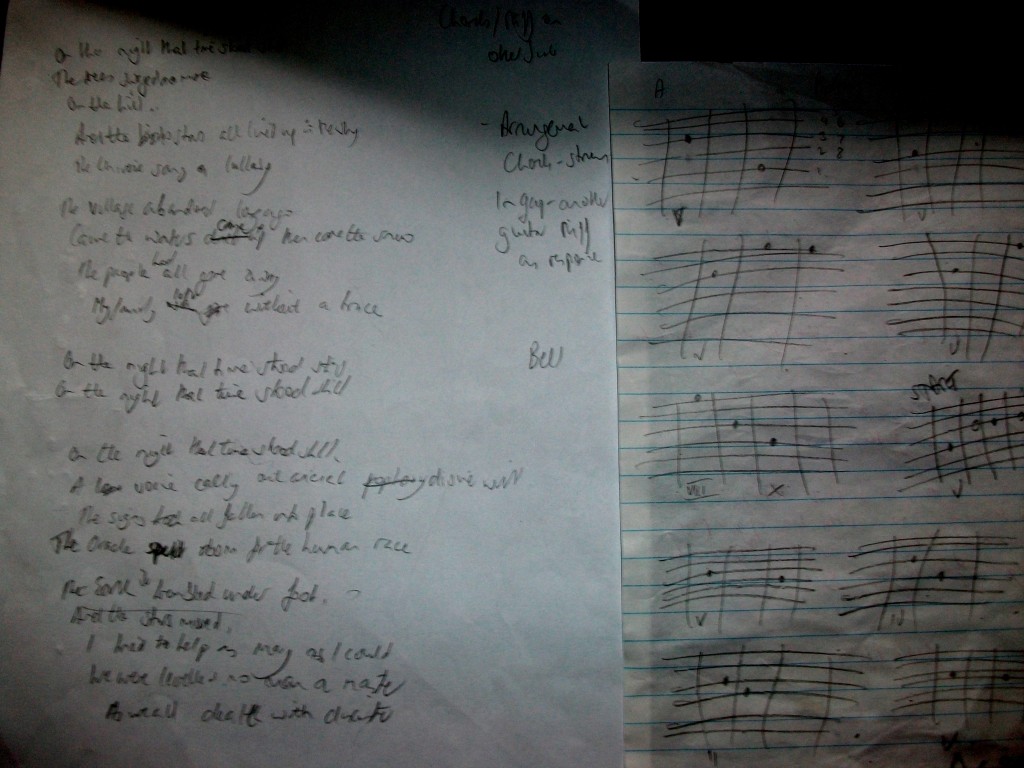 On the night that time stood still words chords

I have got used to doing stuff my own way. So everything just goes into my unconscious, its part of me, don’t make me explain what I did or have to figure it out theoretically. Can’t it just be enough? I leave to those who can what they can. I find my way musically. I don’t set out to write a song in Bb minor or some such, these days I know if I want to be a bit more creative, fancy, with minor keys I have a selection of modes  and exotic sounding derivations I can play with, scales to embellish. Chords which work well. But sometimes its a word, sometimes a melody, a sound, a chord, a rhythm that suggests a song or soundscape, it is not a logical process. It goes where it goes, maybe I go ok  change is needed here – then it’s a feel your way gig, is this right now? Does this sonically capture where I’m at and what’s going down? Yep.

I never knew this is the chord key relationship thing till recently. I knew some chords, I figured out others placing my fingers all over the place and listening to how it sounded. We absorb enough through our culture to know the way it goes, there is an enormity of musical styles to suggest possibilities and we absorb it all unconsciously than it forms our canvas, our neural network of knowledge of sound relationships. I’ve ended up doing a few years of higher ed. Must have been meant to be. It filled in some gaps, gave me a theoretical foundation, some understanding of how abstract symbols are represented and interpreted depicting melodic  and rhythmic content, time and structure, and a multitude of other relationships. But I don’t practice that. I’m a rebel at heart so I fall back on habit. I still do it how I do it, as I don’t have a workable Sibelius. And that makes composition completely different anyways. It become more of a transcription exercise. The programs are also not fluid enough. I believe they should be able to capture every nuance and interface with consciousness, but we are not there yet. Software on the other hand DAW’s, virtual hardware, is so liberating, of  what I have been able to learn to use so far. There is only so much you can depict with stave. With software and digitisation you can depict and sculpt all sorts. It is a doing playing thing. A being in time thing (hope you don’t mind me nicking that line Steve xx). Software DAWS capture dynamics and feelings in real time, sequences of events. Staves don’t show the intricacies of trimbre other than instruments, they do not show sound envelopes, they don’t show automations and effects, panning and spatial head tripping stuff, conceptual nuances. Though I believe after looking into graphic scoring,  some of that can be represented but not interpreted as  human would by the software. One day when they write the codes to interface any DAW programs with say Sibelius or the other Notation software, than that will be a big leap forward. There is so much to represent about sound and music.

Still I write all this stuff  and struggle immensely within my limitations, on multiple levels, to capture and deliver my tunes to you. It’s been a long learning process, but the music was always in my head since childhood, pre teens, begging to come out to play. Melodies,  melodies, rhythmic patterns and  melodies  that said to Melody “My magic means move mountains to follow me- endure tempests, battle tornadoes, titans and tyrants, be shipwrecked, marooned and desolate, drown in the tides, then get resurrected each day as the sun rises- if you want my prizes. Follow me”.  How could she resist Neptunes realm?

So here I am, I followed Melody, (that girl on my home page in the Cello Boat.). She said play, I fought against her, feeling not good enough, I lost my mind often, my heart got devoured and fed to the dogs, we crafted new worlds, made albums, now I bring it to you bit by bit as I am not a mammoth enterprise , just a solo voyager. I done it, best I could. I don’t know how the industry works- I am a virgin in uncharted waters, on a luscious island of exotic fruits- but older and wiser and able to cast my own sail. I seek a fleet to sail with me into foreign seas, Help me chart the future- help me sail the seas of sound, help me find my ground. I need help for some of it, I cannot do it all alone.

THE SONG INSPIRED BY MELODY (look up) THAT GOT ME WRITING MUSIC AGAIN DESCRIBING THE JOURNEY IN THE WINDCATCHER AFTER THE BIRTH OF MY SON AND A LONG HIATUS OF LIFE’S WHAT HAPPENS (J.Lennon).

All Alone Out at Sea Demo

So a girl from the north who lives in the south has done some musical stuff. I don’t know what you make of it, any of it. People rarely say and it drives me nuts, it’s the echo out in a long tunnel- tunnel vision that never dissipates- or fades into the silence, The tree in the forest – but was it ever really there in the first place to fall?

I struggle with a lot of stuff, the hurdles have been no trifle matters. But the ‘Windcatcher’ sails ( the names of Melodys Cello boat). Even with raggedy sails, weathered, wizened, those tails be told by another minstrel. Here I am. Ready for the first single to sail from my ship,- into the seven seas of solitude. More soon. Stay afloat………………………….